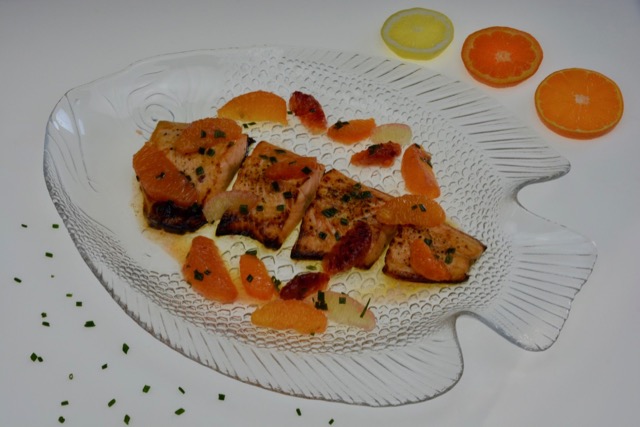 Arctic Char is a flavourful pink-fleshed fish that is related to trout and salmon. Char is native to the arctic waters of the Northern Hemisphere and I was inspired to try it.

Why? Because I am in Canada’s Yukon Territory this week, for the first time.

I am travelling to Whitehorse to teach a course so naturally I looked up the Top 10 foods Yukon Territory in known for. (Doesn’t everyone do that?) The list included traditional First Nations dishes like bannock and smoked salmon as well as wild game, sourdough bread and lots of fish. The fish includes king crab, salmon, trout and Arctic char. I decided to post a recipe for Arctic Char just because I had never cooked it before.

Fish is the ultimate fast food. It cooks in minutes and lends itself to simplicity. This recipe shows off the Arctic char and lets the individual tastes of the citrus fruit come through. Arctic char is a thin fish so it cooks quickly under the broiler. The trick is to have everything ready. At the last minute cook the fish and sit down to enjoy it.

Using citrus fruit and citrus zest brings a sparkle to so many recipes. This recipe includes a citrus sauce made with citrus supremes. What is that you ask? It is a fancy term for a method of preparing citrus fruit. The process removes all the peel and pith, then each segment is cut away from the interior and you are left with only the succulent segments.

I adapted this recipe from The Side Chef and thought the combination was brilliant.

Let me know in the comments below if you tried this Arctic Char.

1
Preheat the broiler. Prepare rack so your fish will be 3 inches from the broiler. Place an inverted baking sheet on top of another baking sheet to get the fish closer to the heat. Oil the bottom of the inverted baking sheet. Set aside.
2
Cut the orange and lemon segments into a bowl. Start by cutting off the top and bottom of each fruit using a serrated knife. Next cut away all the peel and pith. Then cut inside both sides of each segment until the fruit falls away. Squeeze as much juice as possible from the cut ends and the remaining membranes of each fruit. (see video link in recipe description)
3
Remove 1 Tbsp citrus juice from the bowl of fruit for the marinade.
4
MARINADE - In a shallow bowl combine 1 Tbsp of citrus juice with 1 Tbsp honey and 1 Tbsp olive oil. Whisk to combine. Add Arctic Char fillets and marinate 5 - 10 minutes.
5
SAUCE - To the bowl of citrus segments and juice add 2 Tbsp olive oil, 2 Tbsp minced chives and ¼ tsp sea salt flakes. Stir to combine.
6
COOKING – Remove fillets from marinade and place skin side down on prepared baking sheet. Lightly season with salt and pepper.
7
Be sure the fish is very close to the broiler and broil 4-5 minutes, no more.
8
Transfer fish to serving platter and top with citrus sauce. Serve the remaining sauce of the side.