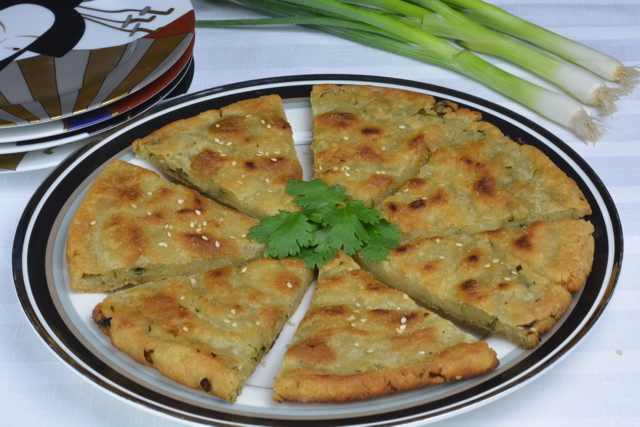 We’ve been making Chinese Onion Bread in our kitchen for years. It is a flatbread sold from street vendors in northern China that I read about in one of my very first Asian cookbooks, Pacific Flavours. I love Hugh Carpenter’s amazing flavour combinations and interesting interpretations of Asian cuisine. That cookbook forever changed what we eat in our kitchen.

I was inspired to recreate a gluten free version of my Chinese Onion Bread when I came across a recipe made with chickpea flour and tapioca starch. Although this first attempt was good I thought it could be a little lighter if I used my gluten free flour mix. Then I substituted some of the flour mix with chickpea flour. After several variations I came up with this recipe.

You can follow the recipe exactly but as you gain confidence I encourage you to try different flour combinations. If you simply pay attention to the properties of different flours over time you will learn how to substitute. That is what I learned writing my yearlong blog series on How To Use different gluten free flours. Now I feel well equipped to substitute different flours and don’t worry if I run out of one.

If you are adventurous you could try and replace the amount of chickpea flour with something else and see how it works. After looking at several recipes I found some using oat flour, millet flour, corn flour or masa harina.

Sesame oil, a key ingredient in this recipe, is used as a flavouring rather than a cooking oil. It has an assertive taste that works well in many Asian recipes making it an important pantry ingredient. So if you were hesitant about purchasing sesame oil here are several other recipes that you can use it in. Buy some right away.

Let me know in the comments below if you tried this Chinese bread as written or if you changed it a bit.

1
Measure flour and xanthan gum into a food processor.
2
Pulse a few times to mix the flour. With the processor running add hot water until the mixture comes together as dough. Remove from processor and flatten into a disk. Cover with plastic and let rest for 30 minutes.
3
Use a small amount of tapioca starch or sweet rice flour to dust the dough as you roll it out to a 10-inch circle.
4
Spread sesame oil over top of dough.
5
Sprinkle with salt, green onions, cilantro and sesame seeds.
6
Using your hands roll the dough into a long rope.
7
Pinch the ends then starting at one end coil the dough into a circle. Flatten it with your hands then roll the coil into a 10-inch or 11-inch circle. Flip it over a few times dusting it with small amounts of flour to prevent it from sticking to the counter.
8
Sprinkle additional sesame seeds on top pressing into the dough, if desired.
9
Heat oil in large frying pan over medium-high heat.
10
When very hot gently place the round of dough into the frying pan.
11
Cook turning every 2 minutes until golden brown and cooked through, 8-10 minutes.
12
Cut in wedges and serve warm. Best eaten the day it is made.