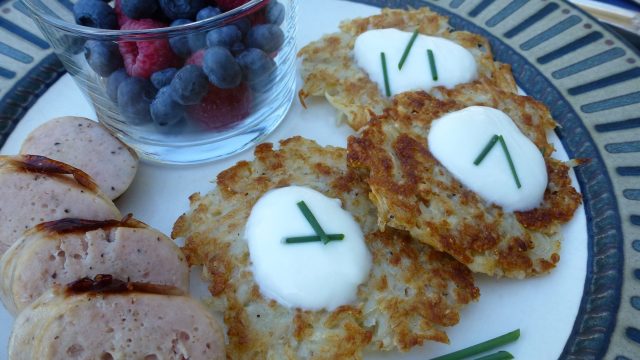 These pan fried potato latkes are delicious for breakfast or brunch and are a weekend favourite in my house. Fried potatoes seem to have some kind of magic over everyone.

Potato latkes are loved by many cultures and the variations are unlimited. The potatoes can be diced, shredded or grated. This recipe is adapted from my friends mothers’ recipe, printed in a little Ukrainian cookbook called The Busy Baba. My mom, of English and Scottish heritage, made potato cakes using leftover mashed potatoes and green onion. These Bubble and Squeak Patties are more like my mom’s but they aren’t the same as latkes.

For eating latkes there are two camps;  those who put sour cream on their latkes and those who prefer applesauce. I’m in the former but in our house it is more likely to be low fat plain yogurt because I always have that in my fridge.

Potato latkes may or may not contain onion, egg and apple. Most recipes have some type of flour but there are lots of options for a gluten free version. Latkes can be made without any flour at all but chickpea flour, oat flour, potato flour or any rice should be just fine. I want my recipe to be firm enough to also work as an appetizer. A latke you can pick up by hand when topped with smoked salmon and crème fraiche. So for this recipe I used gluten free oats and gluten free corn flakes, two ingredients I keep in my kitchen. When cooked the result is a perfectly crisp latke. But just make the adjustments for what you keep in  your kitchen.

If you’re interested in experimenting with different flours I might try chickpea flour, oat flour or a gluten free flour mix. I learned a lot writing my year-long blog post series on gluten free flour. There are links to all 12 posts at the bottom of each one. The first is How To Use Rice Flour in Gluten Free Baking.

I have a Latke Towel. Can you believe it? A designated dish towel with LATKE TOWEL written in the corner with permanent marker. Squeezing the potato-onion mixture leaves an onion odour on the towel so one day I just did it. I wrote on that towel. Once the towel gets to the laundry room it should be washed soon to avoid that lingering smell. I can’t say I’m especially good at doing that, it’s more in the category of needs improvement.

Every kitchen needs more than a few basic tools. Most of those tools will last a very long time in your kitchen so go for quality. Fry up these latkes any way you like using:
Let me know in the comments below how you make your gluten free potato latkes.

Click on the text to go to the recipe.

1
Line a large bowl with a thin dish towel. Shred the potatoes, onion and apple with the fine grating disk of a food processor or by hand. Transfer to the bowl. Pick up the corners of the dish towel and wring the potato mixture as tightly. Squeeze out as much liquid as possible.
2
Pour out the liquid from the potatoes leaving the starch in the bottom of the bowl. To the starch add the potato mixture, eggs, oats, corn flakes, salt and pepper and stir the batter until combined.
3
In a large frying pan heat a generous amount of oil over medium-high heat until it is hot but not smoking. Add large spoonfuls of potato mixture, about ¼ cup each, to the oil and cook latkes about 2 minutes per side, or until golden brown. Transfer to a plate lined with paper towels to drain.
4
Serve hot with sour cream, plain yogurt or applesauce.