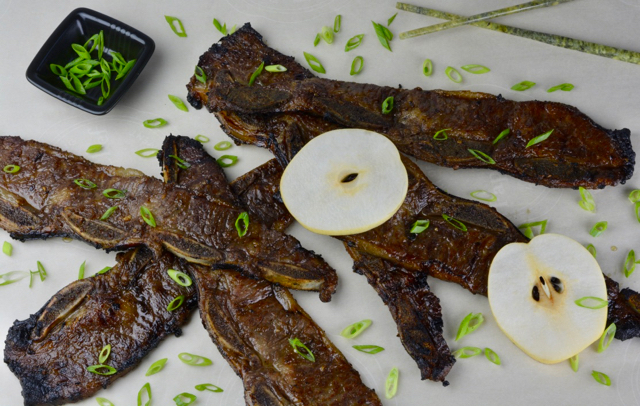 Korean Short Ribs are “in” and I’d be the first to say you don’t need to make dishes that are trendy but sometimes it’s just fun. To avoid the rut of serving the same dishes over and over, get in the habit of trying something new. Whether it’s once a week or once a month, trying new foods, cooking methods and techniques builds confidence in the kitchen.

Barbecuing is a popular cooking method in Korea but it is the way these short ribs are cut that makes them stand out. I usually think of short ribs as an oven dish. Those small, one-bone chunks of chuck meat typically cooked over a long period of time. This method breaks down the connective tissue making the meat tender.

Korean-style short ribs are cut lengthwise across the rib bones. Barbecuing this style of ribs is popular in Chinese and Korean cuisines, where they are cooked over high heat in a short period of time. That makes this a quick dish and the cut itself makes for an interesting presentation.

This recipe calls for mirin, a sweet, sherry-like Japanese liquor that may not be in your kitchen cupboard. Mirin is made by fermenting sweet rice and contains nothing but the alcohol from fermentation. The Eden brand mirin I found is gluten free, corn free and non-GMO  (at the time of writing) but not all brands are.

‘Buyer beware’ must always be top of mind when shopping. There are so many products available you need to be aware of labels that say “in the style of” or “____-like”. This means there is a recipe (the ingredient list) to make the product. These recipes include all types of ingredients including wheat, hydrolysed vegetable protein that could be made from wheat and things you have never heard of. I avoid those food-like products as much as possible.

The typical suggested substitutes for mirin are sherry or vermouth. I learned this substitute many years ago and I use sherry all the time. The beauty of sherry is that I can buy it at any liquor store. My brand is W&H Dry Sack sherry. I keep a big bottle (26 oz/750 ml) in my liquor cabinet and use it in many of my Asian recipes such as:

Although I have sherry I did buy mirin, just for this blog post. It wasn’t hard to find but I’m happy with my sherry so will likely stick with that when my mirin is gone. So buy some mirin if you want, or substitute with sherry or vermouth.

To learn more about gluten free Asian cooking check out blog post, the Gluten Free Asian Pantry. If you’re just starting to expand into Asian cooing then here’s a tip that you can write on a recipe card and tape to the inside of a kitchen cupboard.

Fall is pear season and this recipe uses a grated pear in the marinade. Asian pears are round and taste like a cross between an apple and a pear. Just like any pear you can eat it whole or cut, peeled or not. In the grocery store they go buy any of these names; Chinese pear, Korean pear, Japanese pear, Taiwanese pear, apple pear and even sand pear. I’m sure there are varieties too but I know nothing about that. Just see if you can find an Asian pear and try it.

Let me know in the comments below if you have tried, or now want to try, these Korean Short Ribs. Did you buy mirin?

1
Combine marinade ingredients together. Pour over ribs in large marinating container. Refrigerate overnight. Flip the container over in the morning.
2
Preheat barbecue. Drain ribs and discard marinade.
3
Grill short ribs on medium-high heat, 3-4 minutes per side.
4
Serve ribs as whole slices or cut into smaller pieces if desired. Garnish with sliced green onion and slices of Asian pear.
5
*See recipe description for more details on substitutions