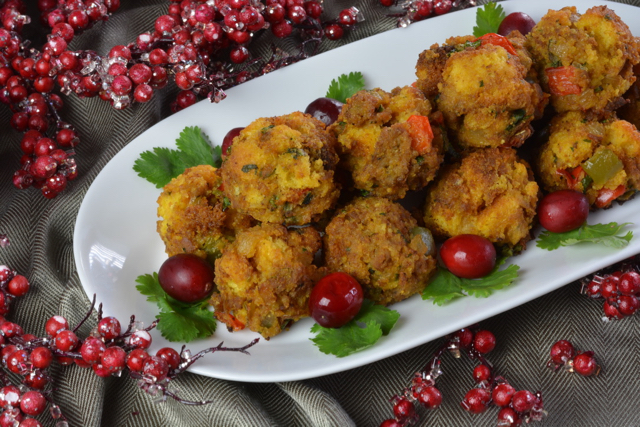 Cornbread Sausage Stuffing Balls can be a novel appetizer or just a fun way to serve more stuffing as part of a turkey dinner. In my house the stuffing disappears pretty fast no matter how I serve it. I didn’t need another way to serve stuffing, but I couldn’t resist the idea of stuffing balls because they’re a change from the ordinary.

You can make Stuffing Balls from any stuffing recipe and you can make them any size you like. I started with the recipe for my usual Cornbread Chorizo Stuffing. Then I simply increased the amount of liquid in the recipe and added a few eggs to hold them together.

I tried two methods to make these stuffing balls. Using a portion scoop was easiest plus the balls stayed together and browned evenly in the oven. I personally think portion scoops are one of the BEST kitchen tools ever (and would be an excellent gift for any cook). The scoop that measures 1½ tablespoons makes a dainty appetizer size.

I also tried making stuffing balls in a mini muffin tin. They were a uniform size and browned nicely but some of them broke taking them out of the pan.

I’d love to hear in the comments below if you made stuffing balls and how that worked out for you.

I want both gravy and cranberry sauce with my stuffing no matter what.

These Stuffing Balls can be a novel appetizer or just a fun way to serve more stuffing as part of a turkey dinner. Either way I like them with gravy and cranberry sauce. Who needs turkey with stuffing like this!
Print Recipe Pin Recipe Rate Recipe
Author: Cinde Little
Course: Appetizer, Side Dish
Cuisine: Southwestern
Keyword: cornbread sausage stuffing balls
Prevent your screen from going dark

*Gluten Free Cornbread Recipe
Tried this recipe?Let us know how it was!