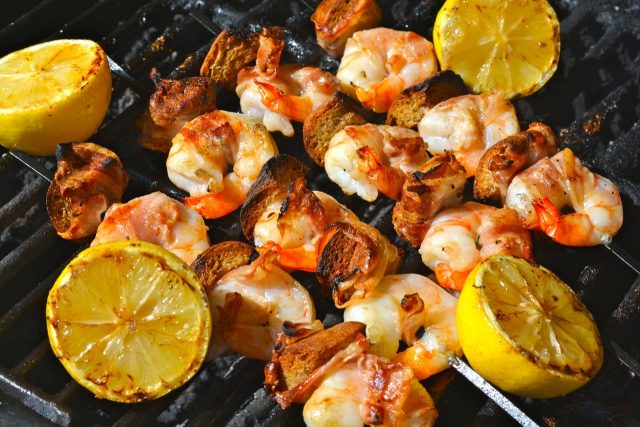 Shrimp on the Barbie sounds like an Australian dinner to me so as we planned our trip “down under” I planned to post Australian recipes while we were away. It’s true, Australians really do like to cook shrimp and they do it on a barbie.

A quick YouTube search took me to Jamie Oliver’s Food Tube where he was cooking up shrimp with the iconic Sydney Harbour Bridge in the background. Perfect I thought!

Jamie skewered shrimp and cubes of ciabatta bread wrapped in pancetta on long stalks of fresh rosemary. I used metal skewers and gluten free bread but the flavoured oil, pancetta and grilled lemon halves were perfect. This simple recipe is perfect for the summer barbecue season.

For my Shrimp on the Barbie I needed a gluten free bread that would hold up to the barbecue. Of course I could just skip the bread but that would be the easy way out. I wanted something a little special. Aussie food was my challenge for July and I was doing it right.

I think my rustic loaf of crusty bread would work in this recipe but I didn’t want to bake. Instead I bought Udi’s gluten free whole grain seeded dinner rolls and cut each bun into twelve pieces. They held up to the heat and absorbed the flavour from the pancetta as well as from the olive oil I brushed on the skewers.

How To Buy Shrimp

I almost always have a bag of shrimp in the freezer. There are so many ways to cook shrimp and it adds variety to your menu. Most often I like fairly big shrimp, ‘go big or go home’ I say. I used 16/20 count shrimp. The number 16/20 refers to how many shrimp there are per pound. The higher the number the smaller the shrimp.

Pancetta, an Italian version of bacon, is salt-cured but not smoked. Prosciutto is made from a different cut of pork but it is also salt-cured and not smoked. Although my recipe calls for pancetta if you can’t find it prosciutto would be a good substitute. The taste will be a bit different but equally delicious. Bacon would give the dish a very different taste.

How To Grill Lemons

Grilling fresh lemons is a fin al touch worth doing. It adds a charred taste and the warm lemons yield more juice than you would have thought possible. Be very careful when squeezing the juice over the skewers, it’s hot!

Whether you have a reason to celebrate Australia or you just feel like cooking Shrimp on the Barbie give this recipe a try. If I get a chance I’ll be making these on a beach somewhere in the land down under.

Click on the text to go to the recipes.

Shrimp on the Barbie

PANCETTA: Depending on the size of pancetta you can cut each piece in half. The extra slices can be wrapped around the bread cubes for an even more deliciousness. GRILLED LEMONS: Once charred the lemons will be very hot. Time is so they come off the grill a minute or two before the shrimp to cool slightly. Grilled lemons are so worth it!
Tried this recipe?Let us know how it was!