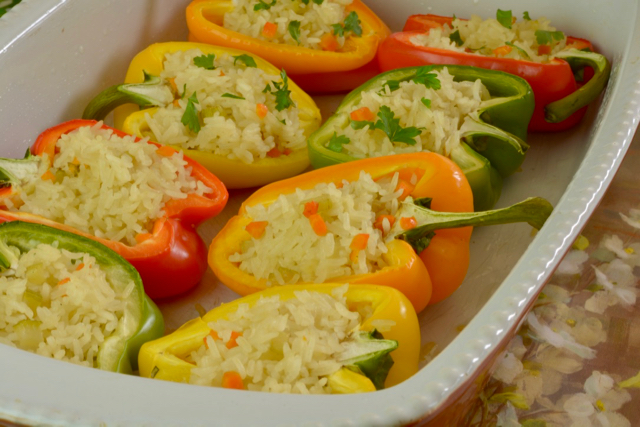 Stuffed Peppers with Rice is a great way to use the gorgeous, colourful peppers available in the fall. But I couldn’t stop at peppers. I tried a second filling, Italian Sausage and Quinoa Stuffed Peppers and I filled zucchini, eggplant and tomatoes too. The variations are endless and I liked every one I made.

I remembered the first stuffed zucchini recipe I made as a young cook. It was stuffed with meat and topped with a velvety white sauce. Since I always love sauce I topped some of my stuffed vegetables with white sauce and some with a homemade rose sauce. The recipe I am sharing here should be seen as a starting point, a suggestion to use your favourite produce, stuff it and top it however you like.

What I mean by a seasonal strategy is to intentionally cook with fruits and vegetables when they are at their best. Plan meals that use produce in season and that will automatically add variety to the meals you serve. Sure, I buy tomatoes in winter and lemons whenever I want them but as a general rule I chose recipes that use produce at its’ peak. Right now all kinds of peppers are at the top of the list.

My son reminded me that not everyone knows what fruits and vegetables are in season. Yes, with so much choice at the grocery store how would you even know there was such a thing. But some of those vegetables travel a very long way to get there and suffer from the time that takes. The most obvious sign of what‘s in season is what looks best. The displays are prominent, usually big and they may include varieties you’ve never seen. Peppers right now are in the colours of the rainbow as well as shapes and sizes you don’t see during the rest of the year. Go and buy some right away.

This filling is simply made by cooking the rice in a pan after sautéing a bit of onion, carrot and celery. For the quinoa filling recipe I sautéed the same vegetables and simply folded in some already cooked quinoa. Both methods worked well.

Add some meat to turn stuffed peppers into a main course you’ll love. I tried ground turkey one night and Italian sausage another. The Italian theme inspired me to top some of the vegetables with a homemade rose sauce I had leftover in the fridge.

No sauce is needed but it adds another element to the dish. I’m a sauce person so I made a basic white sauce (from my Mac and Cheese recipe, minus the cheese). It adds richness to the meat mixture that I love. In your kitchen you make what your family loves.

KITCHEN TIP – Attach this recipe to your container of cornstarch or tape it inside the cupboard door. I’ve got a cryptic version of this recipe handwritten on my cornstarch container. That’s how I memorized it but I still refer to it just to be sure.

When I was hollowing out vegetables and cutting peppers I was using a good Chef’s knife and a sturdy cutting board. But two tools I often use to hollow out squash, including a Halloween pumpkin, are my grapefruit knife and grapefruit spoon. They both have a serrated edge that catches the sides of the squash a little better than anything else. If you’ve got these tools try them.

So whether you find your peppers or zucchini at a Farmer’s Market, the grocery store or a friends’ garden this is the time to cook with them. Let me know in the comments below what you tried.