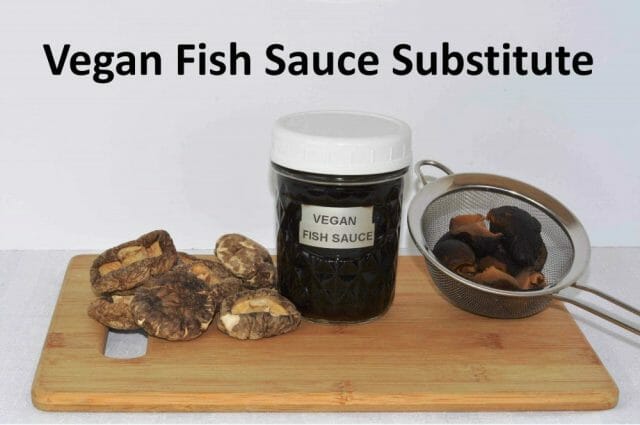 This vegan fish sauce substitute makes Thai and Vietnamese cuisine possible for anyone who is allergic to fish or on a vegan diet. When planning for a Thai cooking class with one vegan participant I searched and I found a recipe to meet this dietary need.

I wrote a blog post about store bought fish sauce, the ubiquitous ingredient in Thai and Vietnamese cuisine. It cannot be omitted but for those who can’t eat it, our cooking class group all agreed this vegan fish sauce substitute was an excellent replacement.

With the popularity of cooking shows umami is becoming well known. It is the meaty, savory flavour taste we love and it comes from glutamates. These amino acids are found in animal protein but also in some vegetables, seaweed and fermented foods. In Thai and Vietnamese cooking fish sauce contributes to both the salt and umami taste.

Fortunately Americas Test Kitchen did all the work and created a recipe. They tried seaweed and thought it didn’t give the meaty punch of fish sauce. In their kitchen they found that dried shiitake mushrooms with soy sauce and a salty broth mimicked the taste more closely. After using it in many of my Thai recipes I agree with the test kitchen, it works!

Lucky for me I always have a bag of dried shiitake mushrooms, also called Chinese black mushrooms. They are sold in a large bag so I give them away generously and store the rest in my freezer. I buy them at the Chinese grocery store and use them in my decidedly non-vegan Lion’s Head Meatballs.

During our Thai cooking class we used this vegan fish sauce substitute to make Yellow Chicken Curry with broccoli instead of chicken, and a Cucumber Carrot Salad. I also figured out that the store bought yellow curry paste is vegan…bonus.

Please share this recipe with anyone who might be missing out on Asian recipes that call for fish sauce. In the comments below I’d love to hear what you made with fish sauce or with this fish sauce substitute.

1
Put water, dried mushrooms, salt and soy sauce in a saucepan. Bring to boil over medium heat.
2
Turn down heat and simmer until reduced by half, about 30 minutes.
3
Strain into a glass jar. Cool, label and store in the fridge for up to 3 weeks.