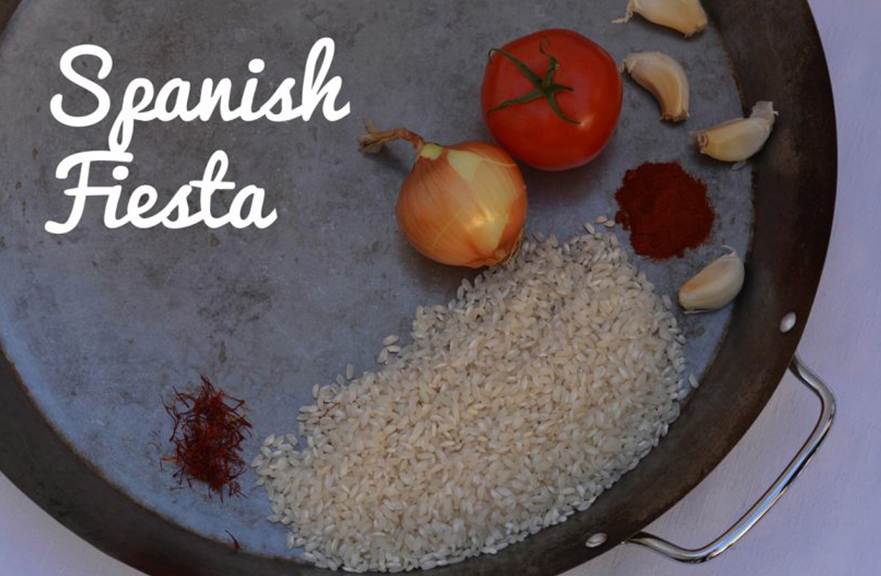 This is a Spanish menu for a Gourmet Dinner Club evening. Finding a date for six or more people to have dinner together is not an easy task but finding a menu can also be challenging. There are unlimited blogs, websites, cookbooks, magazines and TV shows to inspire you but eventually you need to make some choices. Below is my suggestion for a Spanish Fiesta.

My friends and I fondly refer to our Gourmet Dinner Club simply as Gourmet. We have been meeting since 1988 so have cooked and enjoyed many meals together. We have hosted elaborate five course dinners, menus from around the world including countries we hadn’t heard of, Death by Chocolate (where Lisa almost died), tasting menus, garden parties, hole-in-the-wall restaurants and more. The ideas are endless.

Every time we get together you can be guaranteed someone will have a story to tell. From staying up half the night preparing a dish, driving all over the city for some obscure ingredient, or paying an exorbitant amount for an out of season ingredient (that sounded fabulous on paper); you’d think we have done it all. But no, there is always a new story when we meet again.

We have never recorded our stories but we often retell them. Here are three memorable ones.

We have learned to appreciate these semi-disaster recipe stories as part of the culinary adventure. For us, trying new recipes and not being afraid of a disaster is part of the experience. Not every recipe is worth repeating but they are always worth trying once.

Anyone with dietary restrictions knows the challenges of dining out so make that a reason to dine in. If you like this idea you may want to read my post on organizing a Dinner Club. I’d love to hear about your culinary adventures and let me know if you tried this Spanish menu.

A Selection of Tapas