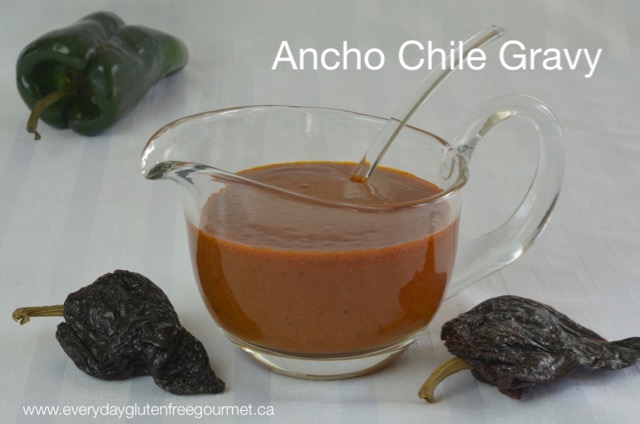 Every family has their own traditions and list of essential dishes for their turkey feast and I’m pretty sure gravy is always included. Maybe not Ancho Chile Gravy but some kind of gravy, and probably plenty of it.

To make gluten free gravy cornstarch or sweet rice flour are often used as a thickener in place of wheat flour. This recipe from my southwestern menu uses masa harina to thicken the gravy and I had been making it long before I heard of celiac disease. So it was a pleasant surprise to realize it was already a gluten free gravy.

Masa harina, or masa as it is sometimes referred to, is corn flour treated with lime. You would probably recognize the distinct taste if you’ve ever had freshly made soft corn tortillas. Masa is easy to find in Latin American markets or anywhere you buy Mexican ingredients. The most popular brand is Meseca and some recipes list it like that as an ingredient.

Once you buy a bag of masa harina you’ll want to make fresh corn tortillas too. Be careful, you might get hooked!

A Little Chile Know How – Poblanos and Anchos

I read a lot about food and will buy any ingredient but it still took me a very long time to know what chile to buy just by it’s name. If you know your chiles by name then good for you. If you’re just an adventurous home cook like me you might appreciate a few tips about cooking chiles.

Chiles are sold both dried and fresh and each has their own unique taste and amount of heat. Generally the bigger the chile the less heat it has. My gravy recipe uses two mild chiles; fresh poblanos and dried anchos. These are actually the same chile. Say what? The name changes when they get dried (I was not consulted on this naming convention).

Think about this. You know that dried grapes are called raisins and you also know that when apricots are dried they’re simply called dried apricots. Go figure! You just need to learn enough to cook the recipes you like so here’s my tip this recipe.

My annual Turkey Feast is bursting with the flavours of the American southwest. There is a poblano chile in the Cranberry Orange and Cilantro Salsa as well as an Anaheim chile in the Cornbread Chorizo Stuffing.

Fresh chiles are often charred, then steamed and peeled to impart a wonderful, smoky flavour to the dishes they are used in. That’s how I do the fresh poblano chiles for this gravy.

Dried chiles can also be blackened in a hot, dry non-stick pan. In this recipe I blacken the ancho chile then soak it in water and use that soaking liquid to make the gravy. It only takes a few minutes and enhances the flavour of the final dish so don’t skip this step.

My best tip for gravy making is to buy a gravy separator, it makes the job easier. I only use it a few times a year so I store it inside my turkey roaster along with the instructions that I cut from the packaging. Apparently using it wasn’t as intuitive as I thought it should be.

This recipe makes a generous portion of gravy but if we have more than ten people we double it. No one wants turkey leftover after the gravy!

In the comments below I’d love to hear some gravy stories from your house.

Tried this recipe?Let us know how it was!