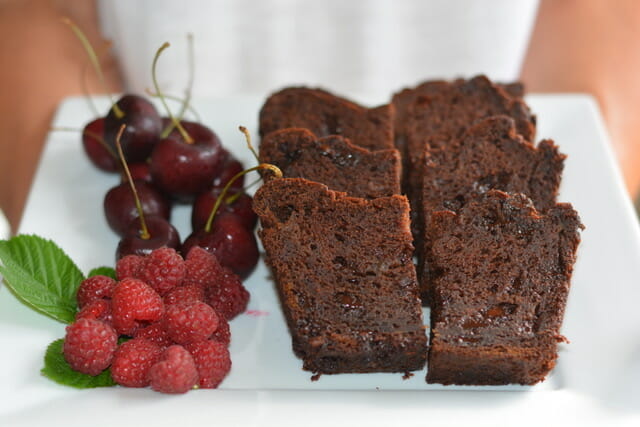 Double Chocolate Banana Bread is the recipe I chose to make for The Allergy-Friendly Kitchen’s summer cooking contest. This contest is a joint initiative by Canadian race car star Alex Tagliani and Food Allergy Canada. The purpose is to raise awareness about food allergies while racing across the county. Food allergies, intolerances and celiac disease (not an allergy but it fits well into this category) are misunderstood so raising awareness is always a great idea.

The Double Chocolate Banana Bread recipe called for chickpea flour and tapioca starch which intrigued me. Over the past year I have been writing a monthly blog post on different gluten free flours. I learned a lot along the way and am now interested in using the flours in my cupboard in new ways.

Coincidentally my banana muffins are the go to recipe in my kitchen for experimenting with flour. I’ve made that muffin recipe substituting a portion of the flour with at least six different flours. Until now I have never made these muffins using chickpea flour.

This post contains Amazon affiliate links. When you purchase using these links your cost is the same, but I receive a few cents for every dollar spent. I appreciate your support for this website.

Rather than experiment with my recipe I used the contest recipe as a starting point. Now I am inspired to use chickpea flour in my own recipe for banana muffins. For now I wanted to start with the recipe the way it was originally written. I did make two adjustments, I decreased the amount of xanthan gum and used regular milk.

If you are interested in experimenting with flours you can read more on that topic in my post on How To Use a Gluten Free Flour Mix. Start by replacing only a small amount in any recipe that already works for you. As you experiment you will gain confidence and learn more about how much of each flour you can substitute.

I use chickpea flour in savoury recipes like the East Indian vegetable fritters called pakora, and the falafel balls of Middle Eastern cuisine. Then there is socca, that tasty snack bread sold on the street in the south of France. Included in my year-long flour series is a post on How To Use Chickpea Flour. Yet I had never tried chickpea flour in a sweet recipe like banana bread until now. And I was pleasantly surprised.

Parents of celiac children tell me they are concerned about getting enough fiber in their child’s diet so it is worth noting that chickpea flour is high in protein, fibre and nutrients. Since most kids love chocolate this Double Chocolate Banana Bread is a recipe to consider making. Better yet, teach your kids to make it.

Beware – fava bean flour is not the same.

Purest is a Canadian company that sells gluten free flour, baking ingredients and mixes, also free of gluten, dairy, wheat and corn. You can order directly from their website but I hear that their products will soon be available on Amazon in both Canada and the US. Stay tuned.

Be sure you are using a gluten free product.

Lastly, in the spirit of raising awareness, I would like to give a plug for one of my favourite magazines, Allergic Living. For an excellent source of up to date information and recipes buy a magazine subscription or follow them online. Make learning a habit because in the world of food the only guarantee is that things are constantly changing.

Let me know in the comments below if you made this recipe and if you changed it a bit.

1
Preheat oven to 350°F.
2
Prepare loaf pan by lightly brushing or spraying with oil.
3
In a large bowl combine all dry ingredients. Set aside.
4
Put bananas in the large bowl of a stand mixer and mash.
5
Add remaining wet ingredients and beat on medium-low speed until smooth.
6
Turn speed to low and add the flour mixture in stages. Beat just until everything is combined.
7
Fold in chocolate chips and pour batter into prepared pan.
8
Bake in preheated oven for 60 minutes until top is lightly cracked and sides pull away from the dish. (Bake muffins for 20-23 minutes.)
9
Cool for 10 minutes on wire rack. Loosen sides and remove loaf from pan. Allow to cool completely before serving.