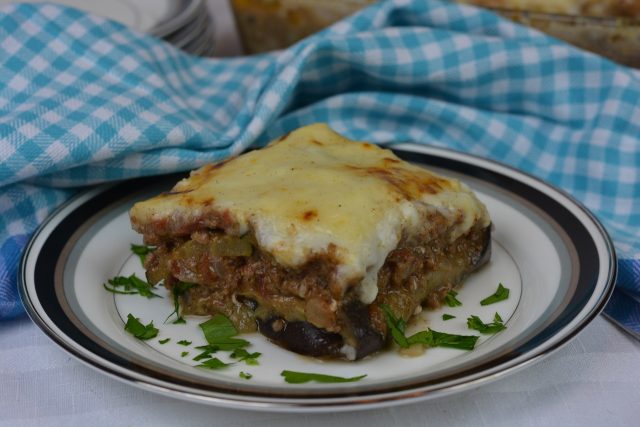 I make Greek Moussaka once or twice a year, always in the winter, served with different versions of a classic Greek salad. This meal reminds me of the first time I visited Greece and the amazing new flavours and classic dishes I was introduced to.

It seems pretty easy to me since I’ve made it many, many times but as I often say; so many recipes, so little time.

When I feel bored with my dinner offerings I imagine the world map for inspiration. Greece reminds me of calamari, tadziki, Greek salad, souvlaki, baklava and this moussaka recipe.

I first visited Greece long before the internet was invented and before tadziki was on the shelf in every grocery store. While visiting I learned about traditional Greek dishes from a physical book, my Berlitz European Menu Reader. This tiny book was filled with essential dining vocabulary, culinary terms and as I recall, an overview of the typical dishes from each country.

Our mission was to try as many of them as we could.

I remember that first moussaka. It was an open-air restaurant in Athens with live music and a view of the Parthenon in the distance.

Traditionally moussaka would be described as a layered meat dish with eggplant (called aubergines in Europe). The meat can be ground lamb or ground beef and the cooked mixture is layered between vegetable slices. Although eggplant is the most common vegetable, many recipes call for zucchini, sliced potatoes or all three.

The topping of moussaka is most commonly a thick béchamel sauce with added cheese and beaten eggs. As the moussaka bakes it creates a slightly firm, creamy topping. This starts with the same basic white sauce you would use to make homemade macaroni and cheese.

Although many recipes for white sauce are made with wheat flour I’ve always made mine with cornstarch. That means it’s naturally gluten free.

For an easier version of moussaka you can avoid the layering process by chopping the vegetables before you sauté them. Simply fold them into the meat mixture and spread it all in the pan. With the creamy white sauce on top it will still look like traditional moussaka and have the same great taste.

There is also some variation among recipes for the topping. Although the white sauce with cheese is my personal favourite some recipes have a mashed potato and cheese topping. The look of the finished dish is similar so if potatoes are popular in your house you might want to try it.

This recipe began from my little book of Greek Cookery, purchased on the island of Mykonos. Over time I’ve adjusted it to the version I’ve posted here.

Let me know in the comments below if you enjoyed it. As they say in Greece, yamas!

A Travel Tale from Greece

From time to time I write a guest post for my friend Sue over at Travel Tales of Life. Here’s a post I wrote about our trip to Greece and the nude beach story from Mykonos.

*Use any combination of sautéed vegetables including zucchini, eggplant and/or potato slices. Check out the whole menu for a Dinner Club evening: Greek Night! Cooked Moussaka can be cooled and frozen. Thaw overnight and reheat in 350F oven for 30 minutes.
Tried this recipe?Let us know how it was!